USA Today bestselling author Kimberly Kincaid returns with a new romantic suspense, IN TOO DEEP. Edgy, suspenseful and hot - in more ways than one - IN TOO DEEP features a friendship turned romance and edge-of-your-seat action!

Rafflecopter for In Too Deep Blitz Tour Giveaway:

One (1) lucky winner will receive an Amazon Echo Dot! To enter, simply fill out the Rafflecopter below: 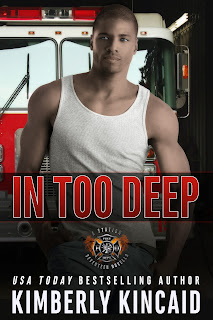 As Station Seventeen’s rookie, Luke Slater knows his fire and EMS training will be both rigorous and risky, but he never imagined having to partner up with the one woman he wants to keep at arm’s length most of all. Quinn Copeland is as wide-open as Luke is reserved. He has no interest in letting the sweet and sexy paramedic rock his hard-earned control. But the need for composure becomes the need to survive when they find themselves in the crosshairs of a brutal gang leader on their first shift together.

Paramedic Quinn Copeland’s station mates aren’t just her friends. They’re her family. She’d do anything to keep them safe—including reluctantly trusting her impossible-to-read, impossibly gorgeous new partner with the one thing she holds close. As the passion between Luke and Quinn goes from a slow burn to a sizzle, their steps grow more and more dangerous, both in the fire house and out. Can they outwit a cold-blooded killer and face the fears that could cost them everything? Or are they in too deep?

I can't rate this book fairly because for me it was really hard and I'm gonna tell you why.
1.  It was a well-written book that I think readers should read only if you know a couple of things going into it and are okay with it. Also, know going into it that it's kind of like a spin-off of Chicago Fire and Chicago PD
2.  There was so much cussing and the use of the Lords name in vain that it overshadowed the book for me and I wanted to put it on my DNF pile, but I read it to the end because I felt I owed it to the readers
3.  It's kind of critical when writing a book with paramedics to get the logistics correct medically.  When you take a blood pressure reading it's imperitive that you get the systolic and diastolic of the blood pressure reading correctly.  If your blood pressure is reading 60/80...you're dead - just saying!  Please flip those numbers because for medical personnel reading your books - we're gonna call you out.  It's just life.
4.  I felt the PTSD component was handled correctly, however, we will not release someone to do their job if we feel it's going to be detrimental to other peoples safety.  We're just not going to do it.

I could keep going, but I won't because it's not in me to be petty and to be honest the core of the book was good.  If you like the shows above, then you'll love this book.  If you love the GD word and Lord's name in vain in every single sentence, then you'll love this book.  I don't. As a matter of fact, I have a rule in the house that if a show says it more than once - it gets turned off.  I think that when you start using curse words so much in your books it's because you can't formulate a proper sentence and come up with others and this might seem harsh and I'm really sorry, but for those that don't want to see 10,325 cuss words (I might be exaggerating) this book isn't gonna be your cup of tea.  If you want a heroine that deals with her PTSD through sex and drinking, then this probably isn't the book for you either.  Is this book well-written other than the extreme language?  Yes, and it would have been really good had it not been for that because the plot had some really good things going for it.  The interactions with the other characters were great, but this was the first book I had read by this author and although I really like the series that I read so far - I can honestly say that I probably can't continue it.  I can't overlook and condone the excessiveness and excuse the language.  I just find it unnecessary and when is it enough?

I was given an ARC copy in exchange for an honest opinion.  All opinions expressed are my own and do not reflect anyone else's.


Excerpt (for those posting Promotional Spotlights):

An excerpt from IN TOO DEEP

Quinn sat in the passenger seat of Luke’s sleek, dark gray sports car, finally able to breathe for the first time in hours. The unease that had clutched at her chest, tightening like a vise with each faked smile and passing minute she’d sat in the Crooked Angel, was finally loosening, allowing her the luxury of a steady inhale/exhale without having to hide the truth from the people who were closest to her. She was in Luke’s car, sitting right beside him. His body was right there. Warm. Safe. Close enough for her to reach out and run her hand over his bare forearm, his fingers that were callused in some places, soft in others.

Luke pulled into the parking lot beside her apartment building, quieting the engine without pulling the keys from the ignition. His gaze moved covertly over their surroundings, mirroring the one Quinn had just sent over the adjacent parking spaces, the brightly illuminated walkway connecting the parking lot with the apartment building, the potential spots where someone might lurk or hide.

“Looks clear.” It was the first thing he’d said since he’d quietly told Isabella and Hollister he was going to take her home, then paid Kennedy for the beers they didn’t drink.

Heeding the detectives’ advice not to dawdle, they both got out of the car, Luke locking the doors with a click-CLICK of a button on his key fob before walking her over the paved path leading to the front door of her building. The tension that had made a playground out of her shoulders faded with each step, and she and Luke made their way over the threshold, into the elevator, and down the tastefully carpeted hallway until finally, they were in her apartment.

“Thank you for bringing me home.” Heat climbed Quinn’s cheeks as she grew aware of how very alone they were, standing there in her dusky foyer with nothing but the soft light filtering in from the one bulb she always left lit over the kitchen sink. But Luke was the only person she didn’t have to hide anything from. The only person who could get her to breathe. The only person she could be truthful with.

And the truth was, she wanted him.

It seemed completely contradictory that her body should respond in such a primal, greedy way when her brain was a jumbled mess. That was just the thing, though. Her thoughts were a mess around her friends. They were a mess when she tried to work, and they were definitely a mess whenever she remembered the kidnapping. The only time her mind wasn’t on overdrive was when she thought of Luke, with his hand on her rib cage and his breath in her ear, as steady as a heartbeat.

God, she wanted his touch so badly, she ached.

“Do you want to talk about what’s going on with you?” he asked, his eyes steady on hers even through the shadows of her foyer.

“Honestly?” She stepped toward him and shook her head. “No.”

“Please, just stop. I don’t want to talk about the other day. I don’t even want to think about it.”

Luke opened his mouth, likely to argue, but she cut him off before he could say so much as a syllable. “Look, I’m not stupid, okay? I know I can’t ignore things entirely. I’m not foolish or flighty enough to think I can magically make the truth into something it’s not. But you asked me what I need, and right now I need to not remember what happened, just for a little while.”

A pause opened between them. Quinn’s heart raced so rapidly she was certain he had to be able to register the constant thump-thump-thump from where he stood.

Finally, he said, “What else do you need?”

For a question that had the potential to be so complicated, her answer was shockingly simple, and even though she knew it made her vulnerable, she didn’t hesitate.

“Just for tonight, I need to feel something other than scared. I need to remember what it’s like to feel good.” She moved closer, until she could feel his exhale coast over her cheek. Yes. This. I need this. “So please, can you stay for a while and make me feel right again?” 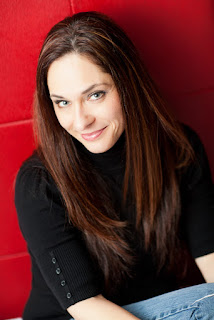 Kimberly Kincaid writes contemporary romance that splits the difference between sexy and sweet and hot and edgy romantic suspense. When she’s not sitting cross-legged in an ancient desk chair known as “The Pleather Bomber”, she can be found practicing obscene amounts of yoga, whipping up anything from enchiladas to éclairs in her kitchen, or curled up with her nose in a book. Kimberly is a USA Today best-selling author and a 2016 and 2015 RWA RITA® finalist and 2014 Bookseller’s Best nominee who lives (and writes!) by the mantra that food is love. Kimberly resides in Virginia with her wildly patient husband and their three daughters.


Posted by CJ Butcher (Janeen) at 8:00 AM
Email ThisBlogThis!Share to TwitterShare to FacebookShare to Pinterest