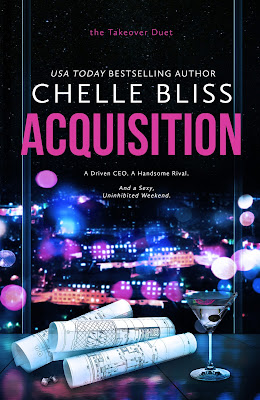 A ONE-NIGHT STAND with a handsome stranger wasn't a problem--until he tried to STEAL her company.
Ambitious, high-powered CEO Lauren Bradley is one press release away from catapulting her company to new heights.
Rival CEO, Antonio Forte is arrogant, controlling, and sexy.
She should know, since Antonio's a one-night stand she thought she'd never see again.
Antonio wants to takeover more than her company, he wants her as part of the Acquisition.
Let the games begin...
Acquisition is the first book in the Takeover Duet.

Acquisition by Chelle Bliss is book one in a two-part series that will continue in Merger. A lot of authors nowadays are doing this "Duet" trope, having the book end on a cliffhanger and then immediately releasing the next in the series. While for some it seems to work and for others it doesn't- Chelle Bliss seems to have caught the market on it because this was a short and interesting read. It kept my attention and even though I kind of knew who the mole was early on because of their skeeviness...I still enjoyed the mystery.

Lauren and Antonio together were a hot couple!! I could just picture him in my mind and what I was picturing made me stop what I was doing and sign up for Merger (because I hadn't done that yet!) I mean, it doesn't matter how it ended - if the books not good, I'm not signing up for the second one! Some people will get upset because this did end on a cliffhanger, but those really don't bother me much. Now, if you're going to release a year later, then that will bother me. However, the only thing that really bothered me was the sexual content and the heroine going back and forth on how she felt about the hero. Other than those two things - it was a well-executed, well-written book.

Chelle Bliss is the USA Today bestselling author of the Men of Inked and ALFA P.I. series. She hails from the Midwest, but currently lives near the beach even though she hates sand. She's a full-time writer, time-waster extraordinaire, social media addict, coffee fiend, and ex high school history teacher. She loves spending time with her two cats, alpha boyfriend, and chatting with readers.
WEBSITE - FACEBOOK - NEWSLETTER - TWITTER - INSTAGRAM
a Rafflecopter giveaway