The deadliest weapons are the ones we never see.
Keyboard prodigy, Lexi Donovan has risen from teenage orphan of the streets to complete independence with little help along the way. When a friend is threatened, Lexi’s anonymous message sends police into a firefight, leading to a wounded cop.
Detective Ethan McAllister’s well-ordered life turned upside down the day an obscuretext message led to a sexual predator’s identity. Since then, Callouston PD’s finest can’t trace the elusive hacker. The latest tip leads him to a brutal mutilation and a riddle indicating the identity of the next murder victim.
The dark net houses a playground for the morally depleted and criminally insane. When Lexi discovers the killer’s digital betting arena, she finds herself centered in a cyber stalker’s crosshairs bearing equal talent.
Street life strengthened Lexi while toughening her protective shell, but nothing could shield her from the shrewd detective forging a path to her heart. 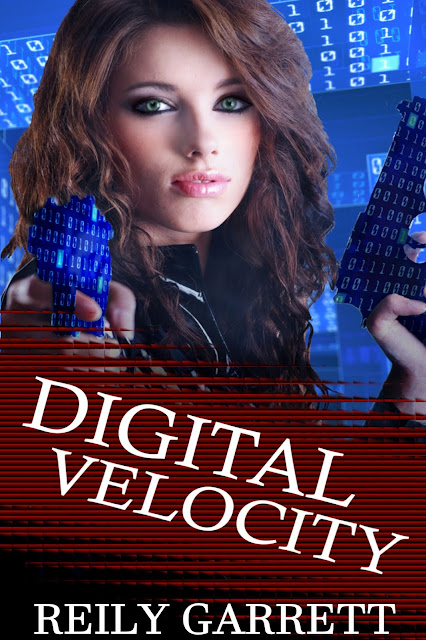 “Digital Velocity is a fast-paced romantic suspense thriller that sophisticatedly weaves drama, excitement, grit, raw emotions and mystery. Garrett takes her readers on a journey where suspense and romance are taken up several notches as she unfolds and reveals the identity of a murderer that is on the loose. With her vivid prose, Garrett entices readers to see the bond that is brewing between Detective Ethan McAllister and his unlikely informant.” Michelle Tan, RT Book Reviews

I read this in one sitting and it did not disappoint.  I love good suspense and intrigue.  Throw in romance and that's even better.  This is a solid 4 star read for me.  The only reason it's not 5 star is because I'm measuring everything by the last 5 star read and it was a tough one.  This book sucks you in right at the beginning and you meet Lexi and Ethan.  Ethan is a strong Alpha hero, which I'm prone to love.  Lexi is a wonderful heroine.  It begins when Ethan is shot after receiving a tip-off and you get to see how he is in his professional and personal life.  Lexi is the one who tipped them off and she feels responsible for what happened to Ethan in a way...that you know there's going to be some romance!!  Lexi's a darn good hacker and when she has to work with Ethan to find out who killed her friend, well they're put in situations that go beyond what it considered "normal."  This was a really detailed book that left me wanting a lot more of it.  When it was finished...I wanted another chapter.  It wasn't because it wasn't done, it's just because it was that good.  For the start of a series, this was spot-on and I will definitely be reading the next one!!

Reily is a West Coast girl transplanted to the opposite shore. When she’s not working with her dogs, you can find her curled up with a book or writing her next story. Past employment as an ICU nurse, private investigator, and work in the military police has given her countless experiences in a host of different environments to add a real world feel to her fiction. Over time, and several careers, many incidents have flavored the plots of her stories. Man’s cruelty and ingenuity for torment and torture is boundless, not contained by an infinite imagination. Witnessing the after-effects of a teenager mugged at knifepoint for a pair of tennis shoes, or an elderly woman stabbed repeatedly with a screwdriver for no apparent reason, left an indelible impression that will forever haunt her subconscious. In counterpoint, she has observed a woman stop her vehicle in severe, snowy weather to offer her own winter coat to a stranger, a teenager wearing a threadbare hoodie. Life’s diversities are endless. Though her kids are her life, writing is Reily’s life after. The one enjoyed after the kids are in bed or after they’re in school and the house is quiet. This is the time she kicks back with laptop and lapdog to give her imagination free rein. In reading, take pleasure in a mental pause as you root for your favorite hero/heroine and bask in their accomplishments, then share your opinions of them over a coffee with your best friend (even if he’s four-legged). Life is short. Cherish your time.