This is me in a Nutshell

I usually don’t Blog about serious things.  They’re usually funny things, things that are facing everyone.  This one is very near and dear to my heart because I suffer from it.  Most people who see me or know me don’t know that I suffer from it or don’t know that I have to take a pill every time I’m out in public.  I have Social Anxiety Disorder and General Anxiety Disorder. I’m an extreme introvert.  Some people think that it can’t be possible because of the way I project myself and the fact that I work in Mental Health.  The fact is – I’m very much afraid of being around crowds of people.  I always have been.  It absolutely terrifies me to go out of my comfort zone, walk up to complete strangers and talk to them.  I went to a book conference a couple of weeks ago and survived on Xanax and prayer.  I don’t take medication all the time, only in extreme times of fight or flight as I call it.  I usually can control my panic attacks by breathing exercises or by the avoidance of situations.  That would be wonderful if I could just stay home all the time but I run a successful Psychology practice and it’s hard to be scared of people when you’re around them all day!! I’ve learned to really fake it til you make it.  A doctor I used to work with gave me that piece of advice that I’ve never forgotten.  He said to me:  “Janeen, sometimes you just fake it till you make it and it works out.”

“Janeen, sometimes you just fake it till you make it and it works out.”

The hardest thing I’ve found is that the older I get, the harder it is for me to open up to people.  I’m more an introvert now than when I was in my twenties.  I don’t know why because my mom is the life of the party, my dad isn’t but he’s not exactly an introvert.  I found myself popping a Xanax before the conference and then I could walk down there to be relaxed enough to be around everyone.  It’s a real disorder. Social anxiety is the fear of interaction with other people that brings on self-consciousness, feelings of being negatively judged and evaluated, and, as a result, leads to avoidance.  It leads to feelings of inadequacy, inferiority, embarrassment, humiliation, and depression.  People usually become irrationally anxious in social situations, but seem better when they are alone.  Social Anxiety Disorder is a much more common problem than past estimates have led everyone to believe.  Millions suffer all over the world and sometimes they suffer in silence because they don’t understand what it is they have.  It’s devastating and traumatic to have this and nine times out of ten that people don’t know they have it.  In the United States alone, it’s the third largest psychological disorder.

I know it’s irrational.  I know that people aren’t staring at me or talking about me and even if they are, I don’t care because that’s the type of person I am…but when I’m in this mindset – I can’t get out of it.  People who really do suffer from it, have to learn to cope or they stop living.  We have jobs, some of us have families, are married, have successful businesses, but we all have this in common…We have panic attacks when we’re faced with having to meet people or go into situations we’re not comfortable with.  They don’t go away even if we know the people we’re meeting.  I can go days and not have any type of anxiety at all but then I can be at the gym, at the store, or at church and I’ll have a full-blown panic attack.  To be trapped inside your head, screaming “let me out of here” is torture.  I don’t drink because I don’t like the taste but I can understand why some people with this disease become alcoholics.  It’s easier to be drunk or to be inebriated in some way than to feel like you’re not comfortable in your own skin.  For me, the hard work is my day job.  Working with children and adolescents, they pick up on everything and if you aren’t comfortable around them – they know it.  All day every day, I put on my smile for 12 hours and I "fake it till I make it" and some days it works better than others.  Some days, it's everything for me to just get in the car and go to the gym at the end of the day.

My advice to someone living with Social Anxiety or General Anxiety is don’t give up living because life is worth living.  Learn your boundaries and learn what you’re comfortable with.  Sometimes pushing yourself past your boundaries is a good thing and finding out that people really are there for you can help put your nerves at ease.  Join groups, form a group, and talk to people who you have things in common with.  Don’t think that anyone or anything is better just because of an outward glance…we all have our demons that we fight every day.  Unfortunately, we don’t wear a sign that says what those are, but we all have them and we all fight them.  Just know that you have people out there willing to fight with you!!

If you or someone you love suffer from Social Anxiety Disorder, there is help out there.  Don’t suffer in silence.  Please contact: 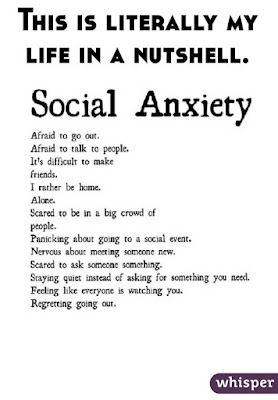 Posted by CJ Butcher (Janeen) at 5:13 PM
Email ThisBlogThis!Share to TwitterShare to FacebookShare to Pinterest