Review: Trying It All by Christi Barth 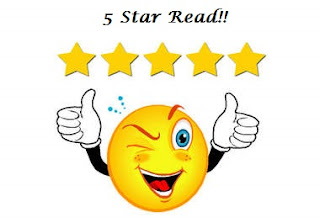 Trying It All by Christi Barth
My rating: 5 of 5 stars

Order. Attention to detail. Never leaving anything to chance. These are the qualities that make Riley Ness such a terrific federal agent . . . and a pain in the ass to everyone else. The only time Riley lets loose is when he’s hanging out with his closest pals. So when he’s thrown together with gorgeous, flighty Summer Sheridan, Riley’s brain tells him she’s a ticking time bomb—but his body doesn’t want to play by the rules.

Riley has to be the most irritating man Summer has ever met. The brooding hunk thinks he needs to teach her a few lessons about real life, while she’d rather show him how to enjoy it. But her BFF’s all but engaged to Riley’s best friend, and besides, their intense physical chemistry is all too real. Summer just needs Riley to try to meet her halfway and take a chance with the one thing that matters: his heart.💖💖 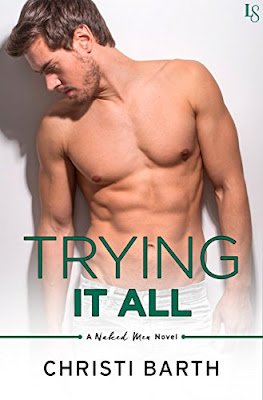 I love this series. I loved the last one with Logan and this one is no exception. I felt so bad for Summer!! She just broke my heart. She was in the shooting with Griff’s girlfriend, from the first book. She was minding her own business in college, thinking what we all think in college – that we’re invincible and then she hears gunfire. She watches a classmate go down and then she feels not one, not two but 3 bullets hit her.⁍⁍⁍ She dies for one minute and 11 seconds on the operating table and from then on she becomes someone totally different. She becomes someone who doesn’t look toward the future but she takes one day at a time. She’s a free spirit and I would personally want to be her friend because she’s fiercely loyal. There’s just one tiny problem – she hates Riley. Riley on the other hand almost died when he was in high school from an accident with all his “blood brothers” that you meet in the other books. The Naked Men. I love them so much and I really need to read the first two. He’s always so prepared that putting him and Summer together is like mixing oil and vinegar. The sexual chemistry, however, is off the charts and they both start looking at each other differently.


I really felt for Riley in this too because he held so much guilt over “killing” Santo – when really it was all just circumstance. It could have been anyone. His life’s mission in the world is to work for the NTSB and to make a difference and he’s not good enough for his parent’s because he’s not climbing the social ladder quick enough. I wanted to hug them both and slap them both a couple times. There was some angst but it was fitting. I really can’t wait for Josh’s book – as a matter of fact….I’m going to stalk Christi Barth so she’ll send me an ARC copy to read because I LOVE HER SOOOO MUCH!!!! Seriously, love her!! I will be so sorry to see these characters go that I might need therapy after this and I’m in mental health….so you know that’s pretty bad. I’ll have to get a colleague to assume care LOL!!!🤣🤣

Final thoughts….Buy it, Consume it, Savor it and if you haven’t read any of the other in the series – Just buy them ALL!!!

I was given a copy of this ARC from the publisher on NetGalley for an honest review. All of the above comments are my express opinions and no one else's.

View all my reviews


Posted by CJ Butcher (Janeen) at 10:58 PM
Email ThisBlogThis!Share to TwitterShare to FacebookShare to Pinterest