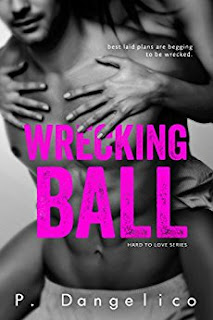 Cam DeSantis’ life is a hot, steaming pile. How else would you describe losing your husband, your job, and your money all at once? Desperate times call for desperate measures, so when salvation comes in the form of one intolerable a-hole, who just happens to be the starting quarterback for the vaunted NY Titans, she has no choice but to accept his offer as a live-in nanny slash teacher for his eight year old nephew. Now all she has to do is find a safe place in her mind to hide whenever she feels the need to throat punch him into tomorrow…which is often.Calvin Shaw has zero interest in women. Wait, wait––let me rephrase that. He loves women, he just doesn’t want anything to do with ‘um. Not since his wife, presently ex-wife, got knocked up by the guy she was cheating on him with. Problem is––there’s one living in his house. And he doesn’t know what’s worse, that he promised to be civil, or that he’s attracted to her.

OMG this book had me laughing from the get go. I wanted to be in this book, I wanted to be their third friend. I can't tell you how much I wanted to crawl into the writing and be like "hey y'all know me and I'm just tagging along cause I'm a freak like that." I wanted to inhale it but yet I wanted to savor it and I'm basing everyone's book I read after by Ms. Dangelico. That's not fair but that's just life y'all!! Seriously, I loved Cam, but I loved her best friend Amber even more. When Amber offered to cut the hero up into tiny pieces and put him into several Coleman coolers and spread him throughout the river...I just about peed my pants. How many times have we thought this about our friends, husbands, boyfriends or people we just don't like? I have...it's disturbing, I know. Some of the things that she said - I admit that at one time or another I've thought it or I might have said it. I'm really hoping that Amber has a story because Gawd she needs one.

Calvin is a complicated character, he doesn't trust people and he makes it quite known. He tries to make himself not recognizable to people so women won't approach him. I love how at one part his own fellow players ask him if his stylist is the "grand wizard of the klan" because he looks like a reject from Duck Dynasty with his beard growing out his face. Your heart breaks for him though when you find out why he is the way he is. Why he doesn't want kids or why he doesn't want to be in the spotlight. He just wants to play football and be the best at what he does but he didn't plan on Cam coming in and wrecking that with her snarky comments and the way she treats his nephew.

Cam, bless her heart she is one of those characters who is funny in her own right. She takes no crap and if she's having that crap thrown at her - you best believe she's going to chuck it at the person who is dishing it. I love she was a strong person even after her deceased husband totally decimated her life by bringing her down in a Ponzi scheme. She doesn't give up, she eats her Ben and Jerry's and gets back up on the proverbial horse and keeps going. Her charge, Sam, is Calvin Shaw's nephew and God Bless that boy.

There is a big surprise that I didn't see coming. Usually, it's used so frequently that you're like whatever but in this it totally worked for me and I loved it!! I didn't want this book to end....I wanted to savor it and I would read a chapter instead of speed reading, set the kindle down, do something and then go back to it. It was that good.

It had alot of unnecessary language in it that I thought it could do without, but it's quite known that I'm not a fan of using the Lords name in vain. I think that it's something that doesn't have to be used. If not for that, I would say that this was an absolute unicorn of a book. The sex scenes weren't all that explicit. They were real to life and the slow burn and build up were awesome. Like I said....Big pink Unicorn!!

I would recommend this to all of my girl posse and buy it for them to read:) I laughed so hard at one point and I'm not even going to say where that I had my mother asking me if I needed help. Seriously, everyone woman and guy who likes sports/romance needs to get this book when it comes out. If you don't - you will never see the unicorn that is P. Dangelico's greatest book yet. I am hoping that she writes a book on Amber's character and Ethan's character (who is Cal's lawyer) that I am so there!! Ethan is one of those characters who could have his own review in itself. He's just that yummified and glorious. Pre-Order this book, buy some Ben and Jerry's, get rid of distractions for the day and settle in to have an awesome read fest!! Like Nike...just do it. You will not be sorry.


I was given a copy of this ARC from the publisher on Netgalley for a honest review. All of the above comments are my express opinions and no one else's.
Posted by CJ Butcher (Janeen) at 2:44 PM
Email ThisBlogThis!Share to TwitterShare to FacebookShare to Pinterest