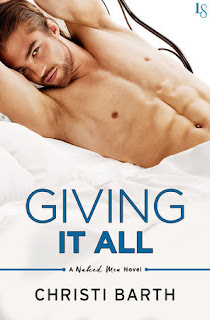 Christi Barth’s smoking-hot contemporary romance series continues as the five best friends who survived a tragedy as teenagers take to their Naked Men podcast to open up about women. In Giving It All, the group’s globe-trotting hunk discovers that you need to go home to find love.

Logan Marsh never stays in one place for long. Through his family’s foundation, Logan spends his days traveling to the world’s most dangerous places to deliver disaster relief, which really puts a damper on his sex life—until he reconnects with his high-school crush. Stranded together in the Caribbean, they enjoy a steamy fling that awakens feelings Logan has ignored for too long. But family drama calls him away from her sweet embrace . . . or so he thinks.

Brooke Gallagher loved being a home economics teacher and cheerleading coach. Then an unexpected tragedy forced her to take some time off. Now she’s back in D.C. and despite the intensity of her tropical encounter with Logan, she’s shocked to bump into him again. Logan’s dealing with his own issues (including a newly discovered half-sister) and he’s itching to get back on the road. More than anything, Brooke wants to be there for him. But first, he has to decide if love is enough to keep him in one place.

I want to just say I love this series soooooo much that I want to be in it Christi Barth. Seriously, name one of your characters Janeen and have her work in Mental Health!!! This was the greatest book that I read out of the 4 I had this weekend. You made me laugh, cry and want to throw the kindle at the wall because Logan was acting like an oaf! I wanted to be Brooke's best friend, best friend. If that makes sense.

I have an affinity for the Naked Guys as I call them. Each one is different but they each have their strengths and weaknesses. I love them all. In my head, I was singing "Another one bites the Dust" and I loved that it wasn't instalove. These two had known each other a long time.

I felt incredibly sorry for Brooke and her situation. It broke my heart because anyone that has been close to someone who has committed suicide knows it's a resounding gong that ripples through not just one life but the lives of many other people. I think this book tackled many subjects that many authors might not tackle and that to me was one of the highlights. She wasn't afraid to tackle the taboo. Was this a book that had sex in it? Yes, but it wasn't the central theme and I liked that!!! It kind of took back seat to the real root of the issues of the book!!

Logan is wonderful hero who has flaws, beautiful, relatable flaws. Brooke is a woman who has been left or abandoned by every man she's ever dated for one reason or another. She's smart, dependable, she's not a whiner, she doesn't complain. She's strong and self-reliant. I just liked her. She meets Logan while she's vacationing to get away from tragedy and he's trying to get back to the US to meet a half-sister he's never met. They have one steamy night and it's on...like he can't seem to shake her and she can't shake him. He can't seem to say the right things because lets face it....guys don't and she takes it the way he says it. What I liked here is that the writer didn't prolong the misunderstanding for chapters! I hate when authors do that for angst. It just irritates the reader to some extent. She gave the reader some angst and then pulled back for some steam. Brooke didn't take any junk and I liked that. She held her ground and folded when she needed to fold. Logan held his ground and did the same. It was real to life. Not all this "it was so fake, I can't read that bull." Loved it!!!

This is definitely a book that I will be recommending to everyone I know!! I have loved all of this author's books and this is no exception. She is talented and knows how to tell a story from start to finish without it getting bogged down in details that don't really matter or angst. Kudos and will be reading all the others that follow!!


I was given a copy of this ARC from the publisher on Netgalley for a honest review. All of the above comments are my express opinions and no one else's.
Posted by CJ Butcher (Janeen) at 3:46 PM
Email ThisBlogThis!Share to TwitterShare to FacebookShare to Pinterest