FIGHTING ATTRACTION
Coming April 4, 2017!
Five sexy MMA fighters who will fight hard to win their girl. Fans of Fifty Shades of Grey, Mine, and Worth the Fight will love this standalone addition to the Redemption series by New York Times Bestselling author, Sarah Castille. 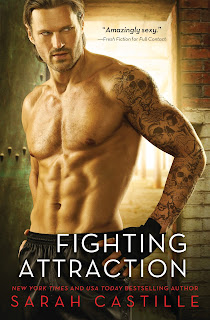 BOOK DESCRIPTION:
My sweet, sexy Penny has a dark side. Just like me.
I will have her. And then I will lose her, and suffer a lifetime of regret.
Rampage. Everyone loves him. He is Redemption's top heavyweight fighter and the biggest gossip in the gym. But he isn't the teddy bear everyone thinks he is. He's hiding a dark secret-and he hates himself for it.
Twice a week, Rampage transforms into Master Jack, a notorious dom only the most hard-core submissives will play with. How can he-a Southern gentleman, bred to respect and protect women-want to dominate them?
But Penny Worthington wants him. Beneath her pearls, kitten heels, and prim British exterior beats a tortured heart...Master Jack is the only one who can set her free.

Redemption Series:
Against the Ropes (On sale for $1.99!)
In Your Corner
Full Contact
Fighting Attraction
Strong Hold (Coming soon!) 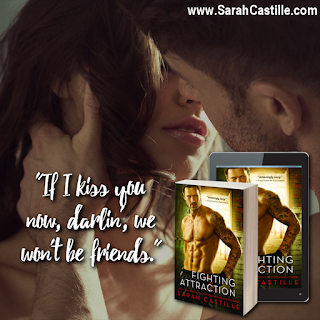 Spread the news about FIGHTING ATTRACTION with a GIVEAWAY!
Grand Prize: One (1) lucky winner will receive paperback copies of the first three books in the Redemption series (AGAINST THE ROPES, IN YOUR CORNER, AND FULL CONTACT).

Enter at:
a Rafflecopter giveaway

"Hilarious, hot and occasionally heartbreaking. I loved it! "- Maryse's Book Blog on AGAINST THE ROPES

"Castille's follow-up to the excellent Against the Ropes doesn't pull its punches." - Publishers Weekly, starred review for IN YOUR CORNER

Other Books in the Redempton Series

ABOUT Sarah Castille:
Sarah Castille is the New York Times and USA Today bestselling author of the Redemption Series, Ruin & Revenge Series, Sinner’s Tribe Motorcycle Club series, Legal Heat series and the Club Excelsior series. A recovering lawyer with a fondness for dirty-talking alpha males, she now is a full-time writer, who lives on Vancouver Island. Sarah loves to connect with readers. Visit her website and sign up for her newsletter to hear about new releases: http://bit.ly/LgFZlb